But not all modal operators ascribe a particular character/truth-value pair. Some merely rule out certain combinations. For example, 'Possibly' merely rules out the combination of necessary character and falsity.

(NB that I am here talking about what are often called alethic modal operators, rather than modal operators in a more general formal setting in which these claims only hold for certain choices of accessibility relation.)

It is common to see the following list of four modal operators presented, sometimes as though it were exhaustive: possibility, necessity, contingency and impossibility.

But reflect again that, of these four modalities, possibility is an odd one out, since it is non-commital on truth-value. Also, note that systems have been developed where other operators, e.g. one for non-contingency, are taken as primitive.

In this post, I try to begin answering these questions.

The notation I want to introduce here can be said to stand to the box, the diamond and such symbols roughly as truth-tables stand to truth-functional connectives. (Or instead of truth-tables, Wittgenstein's ab-notation, Venn diagrams, or the shuttle diagrams pioneered by Martin Gardner and extended by Gregory Landini.)

We can represent operators as matrices containing four cells, one for each character/truth-value combination. We can then mark the fields representing pairs which are ruled out by the operator in question.  A blank canvas, not representing any modal operator,  looks like this:

We can also consider the class of operators which  rule out two character/truth-value pairs: 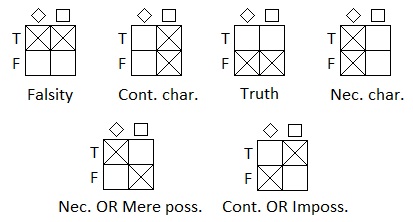 And finally the class of operators which rule out just one character/truth-value pair:

A syntactical test for implication

For any two modal operators A and B, Ap implies Bp iff all boxes crossed in B are crossed in A. (This could license a simple rule of cross-elimination.)

For now, atoms are treated as, in effect, simply being assigned a truth-value and a modal character in the semantics, but this can be brought into connection with the standard Kripke semantics for modal logic. Given an S5 frame, for example, an atom's having necessary character (at a world, if you like) amounts to its truth-value being invariant across all worlds. Contingent character amounts to its not being so invariant.

Among other things: study iteration of operators. Iteration will raise philosophical issues about the application of the formalism. These will turn, at least in part, on how propositions are individuated. Similarly, a case could be made for distinguishing a third character, impossible character, when propositions are individuated in a fine-grained way such that our proposition 'Hesperus isn't Phosphorus' is not the same as the Babylonian. (Our version has impossible character. Theirs, necessary.)
Posted by Tristan Haze at 20:48 13 comments: